Who we are / Origin

When we started out, in the period from June to December 1988, we worked on the launching of the Project: the presentation of our goals, objectives and intended work plan to the various Institutions and Entities; the compilation of information gathered from the various Community Services Network, on their situation and principal activities required; the creation of Working Teams; the establishment of an operating structure etc.

From 1989 onwards, we became a Collaborating Centre of the Basque Government Department of Justice, Employment and Social Security, to develop Occupational Training Programs. (link to the list of services). During this period, for the first time we also became a partner of the BIZGORRE Special Employment Centre. And we received a Honourable Mention, in the social work category of the REINA SOFÍA AWARD.

1990 marked an important step forward, with our closer alignment to the Business World and actions directed at promoting employment. From then onwards, these actions progressively increased in this area, coming under our Employment Area.

In 1991, we would highlight the fact that the number of persons using our services increased threefold, over previous years. This year saw the enactment of the ANTI-POVERTY ACT and it is from within this framework that, during this period, we implemented Inclusion Projects directed at those people benefiting from the Comprehensive Plan to Combat Poverty, based on a Collaboration Agreement with the Basque Government. This also led us to come into contact with people having other social needs, which required social inclusion measures prior to considering occupational inclusion. In this way, a new Area was created in SARTU: the Social and Educational Training Area (link to the list of services) established for the purpose of motivating, promoting personal initiatives and involvement in the community and local area, encouraging the acquisition of skills and habits, etc. In short, the activities offered by this Area constitute SARTU’s response to the Inclusion needs of a large number of people who, whilst having very different backgrounds, all show a certain failure to relate to the local community.

From 1992 onwards, it can be said that the SARTU Federation has progressively consolidated its position, as demonstrated by the ever increasing use of our services as an inclusion resource by professionals from the General Network of community resources, and the increasing number of people we have assisted.

In 1993 we would highlight the publication of the GILTZA magazine as a Training, Employment and Social Work Magazine, intended to act as a forum for the dissemination and presentation of ideas and experiences on inclusion, open to the participation of all professionals in the sector. A further aim was to serve as a vehicle to provide information on the existing resources available with regard to training and employment.

In 1993 we also became a Collaborating Centre of the INEM (Spanish Employment Institute) for training activities in a number of specialities and started to impart courses authorised by the INEM. From that year onwards, we also started to implement Employment – Training Programs at a local level and directed at the long-term unemployed (link to the list of services), coming under the Decrees published annually by the Basque Government Department of Justice, Employment and Social Security for this purpose.

We also received the UTOPIA 93 AWARD in the field of work with special groups and promoted by the Social Welfare Department of the Provincial Council of Bizkaia. FERNANDO CONSUEGRA, the Director of the SARTU Office at Durango received a Honorary Mention in the SUSTATU 93 AWARDS for his research into “Occupational inclusion. An ecological approach to intervention ” (link to research text)

1994 was marked by considerable development in the Employment Area through counselling and consulting services, guarantees and the creation of a number of companies; LANGUNE – occupational guidance service; our collaboration in the ATERPE PLAN (Provincial Council of Gipuzkoa), in addition to an increase in the number of people obtaining a job as a result of our actions. In 1994 we also published the SARTU EMPLOYMENT GUIDE, thanks to the collaboration of the Social Welfare Department of the Provincial Council of Bizkaia, a guide which was intended to provide information on the basic aspects affecting the creation of employment, job council and, in general, information on employment related matters.

In 1995 – 1996 the area of collaboration with the INEM was extended to include Actions to Verify Professional Aptitude; and Comprehensive Employment Services. From that time onwards, we also became a Collaboration Centre with the Basque Placement Service – LANGAI for attracting, processing and managing Supply and Demand (link to the list of services). This period also saw the development of a new type of Project within the Employment Area: the G.A.B.E. Active Job Search Groups as a more specialised service with the Occupational Guidance area and, in general, for job access.

In 1997 we launched the “Program for Job Matching Promoters” (link to the list of services) co-funded by the three Provincial Councils. An innovative project that aims to help people at a disadvantage to get a job through the implementation of a system of positive action within the framework of the public job matching instrument (LANGAI). In turn, it also aims to provide systematic support to small enterprises.

Also, through a subsidy provided by the Basque Government Department of Justice, Employment and Social Security, and under the direction of the Basque Country University (UPV) Faculty of Sociology, Qualitative Research was conducted with regard to how those people receiving a Minimum Wage perceive their exclusion and inclusion process, how they construct their personal identity and how they identify the factors intervening in their cognitive universe (link to research text)

1998 marked the commencement of our participation in European Programs. Together with four other countries from the European Economic Community, we participated in the FRONTIERA PROJECT, a European Training Project directed at workers from social companies, on the new forms of exclusion and marginalisation and the possibilities of creating jobs in urban areas. The program took place at the Centro Italiano de Solidarietá (Rome). We also participated in ADIR, an Employment – Horizon initiative (directed at disabled persons) (link to the list of services).
We made our first contact with the world of Total Quality and Continuous Improvement through the EFQM model.

Also in 1998, we celebrated our tenth anniversary since the foundation of SARTU, through workshops on “New perspectives against Exclusion and Employment” (link to workshop texts)

In 1999 we started to work on the development of Municipal Plans for Inclusion, in collaboration with a number of municipalities. That year impetus was also given to the creation of Insertion Companies (link to the list of services)

In 2002, activities relating to Consultancy services and Social research took on considerable importance within SARTU. This led us to take the first steps towards organising what in 2008 would become the Social Consultancy Area of SARTU. European Projects also acquired particular importance, with the promotion of EQUAL – ITUN (the creation of Insertion Companies, ending with the creation of 20 new Insertion Companies) and ONE TRACK (improvement in the multi-agent co-ordination strategies to combat exclusion).
We also participated in the following programs: EQUAL-ACCENT, EQUAL ZUREKIN SAREAN and SARBIDE.

In 2003 we provided support to others in reflective processes. Here we would highlight the Training of Social Work and Social Intervention professionals in the areas of Insertion Agreements and Social Inclusion Processes. We also prepared a Distance training course on Social Inclusion for all of Spain, in collaboration with UNAD and the Ministry of Social Affairs.
We also continued to put considerable work into the European Programs initiated in 2002.

In 2004, within the framework of the new active employment policies, SARTU was authorised by the Basque Government to be a Collaborating Centre of LANBIDE to carry out activities relating to Guidance, Placement, Training and Learning. We also initiated activities in the field of new technologies to promote social dynamism.

As far as 2005 and 2006 are concerned, we would highlight the intensive work carried out in the field of Insertion Companies, achieving a partnership in 16 Insertion Companies. This year also marked the end of the EQUAL-ITUN Project and the start of the new EQUAL II – LAMEGI project, directed at tackling the social clauses for occupational inclusion. SARTU also commenced a new strategic period with its Strategic Plan 2005 – 2010.

In 2007, the Sartu Federation was recognised as a collaborating entity with regard to equal opportunities between men and women.

During 2008, we started a new European Program, SENDOTU, within Operational Program framework of the Autonomous Community of the Basque Country, FSE 2007-2013, axis 2: Promotion of employability, social inclusion and equality between men and women; measure 2.7: Propose opportunities for the inclusion of excluded people and those at risk of exclusion from the labour market. 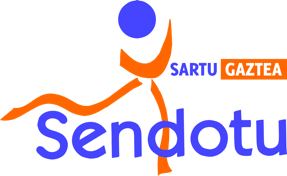